July 14, 2013
About a year ago I saw and pinned this dress from Modcloth onto one of my Pinterest boards. There was no way I was going to pay $129.99 for a sundress, but I thought maybe I could find a similar fabric and make my own. 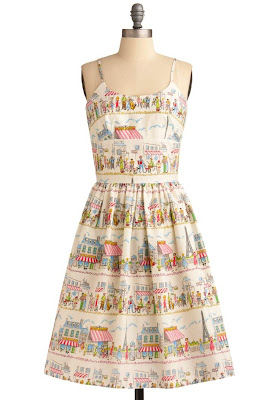 I spent some time Googling "Paris" and "Eiffel Tower" fabric, and eventually found the exact same one! There were actually a few places online that carried Michael Miller's "Parisville" fabric. The best price was from this eBay store. 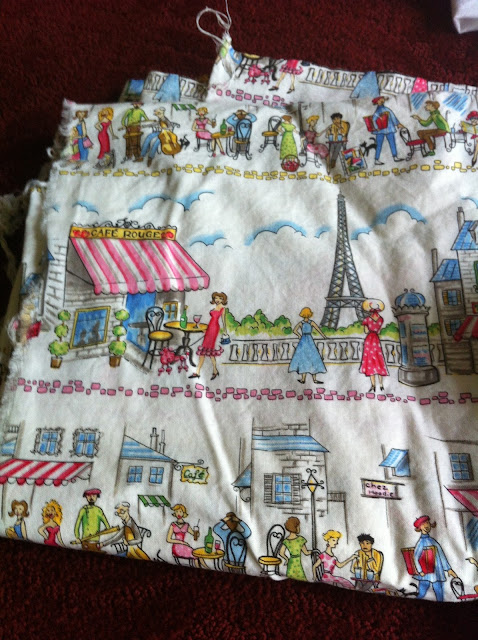 I found a pattern that I actually liked better than the original Modcloth version. I made several modifications to Style C. I purchased the fabric for $52.80, and only had to buy a few other notions, so overall I spent about $65.


This was the first "big" sewing project I'd done on my own. (Usually my idea of sewing is picking out fabric and a pattern and talking my mom into doing the sewing.) For many years, I was convinced that our sewing machine only worked for my mom. It seemed like I couldn't make it through a complete seam without some sort of tangle. I had to re-thread it all the time.  This year we finally had it serviced and repaired, and it's been so much less frustrating!

I ambitiously decided to make some modifications to the dress. I didn't like the panels on the bust, so I just left them off. I also skipped the boning because it seemed unnecessary. I changed the strap so that it fastened with one big yellow button in the back. I copied pockets from a skirt pattern my sister had and added them in a yellow polka-dotted fabric.  I also wanted the dress to be fully-lined, and even sewed bra cups in, so that I wouldn't have to worry about a slip or strapless bra.

I made sure to read through the instructions and make lots of detailed notes so that I wouldn't mess anything up. I only had to take out and redo three or four seams, so I guess I was fairly successful. ;)

One thing I completely forgot about was the fact that I would have to make sure the print on the fabric was always facing upright. Fortunately, because of the quantities they sold the fabric in, and I had bought more than the pattern called for. I was able to layout the pattern pieces and make it work. I had to cut some of the skirt panels slightly smaller, and had to adjust the bodice a teeny bit to make that work.

The final hiccup was when I tried it on to figure out strap placement and realized that the bodice was simply too big around. I had made a mock-up and tried on the bodice a few times before I put in the zipper, but I guess I had allowed for too much seam allowance. My mom helped me with a few discreet darts.


After working on it on and off for almost a year, I'm really happy with the finished product. It's the first thing I've sewn that doesn't look homemade.

What are you sewing right now? Ever made a copycat? Any sewing tips? Leave a comment below!