May 08, 2011
This week we had three different speakers: David Hamilton, Maria, (our school leader) and Joseph Avakian. Since we are a Performing Arts DTS, the talks were kind of focused on how Arts can spread the gospel and how to use Arts. I especially enjoyed the last three days, when Joseph spoke. He’s a really engaging speaker. I felt like this was the first week where I felt like I was learning new stuff from lecture, like a lot of it has felt sort of like review before this.

My favorite talk was on Thursday, when he talked about the “boxes” we naturally put ourselves in, based on mainly 6 things: Fear, Comparison, Criticism, Egoism, Arrogance, and Control, and how to break those things by coming in the opposite spirits. (that’s kind of a YWAM-y term, which means pretty much what it says, doing the opposite thing)  So Love, Identity, Exhortation, Generosity, Humility and Freedom. His talks were very visual oriented, with a lot of pictures on the whiteboard, so he concluded that one by showing how when you unfold a six-sided box, you get a cross.

My rehearsal schedule was bit lighter this week, which was nice. Unfortunately my lower back/hip is really bothering me. I didn’t make it into the couple’s Ceroc (like swing/salsa) dance or the Tahitian, but I am in one called Hansam. It’s a Korean thing, where you have these long tubes that go over your wrists (with elastic) and then you hold drumsticks underneath. It kind of looks like your dancing with ribbons, but it’s actually more like sleeves. So that was pretty fun. We also had auditions for the Spanish dance and group singing practice. (We’re singing Joyful, Joyful from Sister Act 2.) 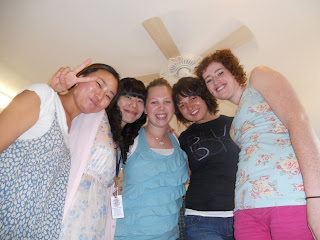 I had a little more free time to relax this week, had lots of movie nights, swam in the pool, spent time in the prayer room, read, went and got some shopping done at Target.

Had some tension with one of my roommates on Wednesday so that was kind of stressful.  I didn’t know what was going on with her until she passed me a note during class, and we were busy all day. to make matters worse, my small group leader had to postpone our weekly one-on-one meeting, so I was just kind of upset all day and I didn't get a chance to vent. Once my roommate and I actually had a chance to talk, we got it all worked out easily though.

Our big Thursday night service was nice. They had the kids participate in worship, and then we watched a bunch of videos from this project called grassrootsnews.tv. Basically the idea that people anywhere in the world can report and upload news videos about what’s actually happening. So they had some earthquake footage from Japan before major news networks did and stuff. Anyway they played some cool stories, like these flying cars that Steve Saint (from the End of the Spear) is inventing for missionaries to use.

It was a pretty rainy and chilly week. We had a huge rain/thunderstorm on Friday. It started DUMPING rain, and a bunch of people had to bail out the guy’s hallway so their dorms didn't flood. 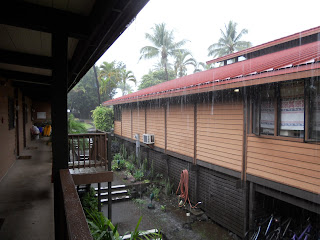 It's hard to believe that it's already been more than a month! It feels like it's gone so fast, but the days seem so long too. 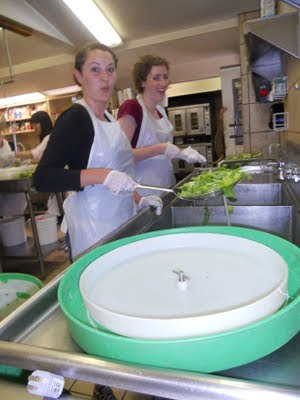 By the way, I haven't completely given up on cooking and crafting (that was the original purpose of this blog.) I've been doing a little knitting in lectures and I have a project almost done, and I do get to cook...gross cafeteria food.
Dance and Theatre Faith Family and Friends Food Hawaii Japan Jesus rain rehearsal shopping swim Travel worship YWAM