Agh! Two blog posts in one day, craziness right? This one is less significant than the first, just some fun makeup and nails I wanted to share. (I kind of want to do this for Halloween now) Inspired by Effie Trinket's reaping day look in The Hunger Games:

Sorry for the not-so-great pics, I was taking them of myself with my phone, so yeah, they're not the best. 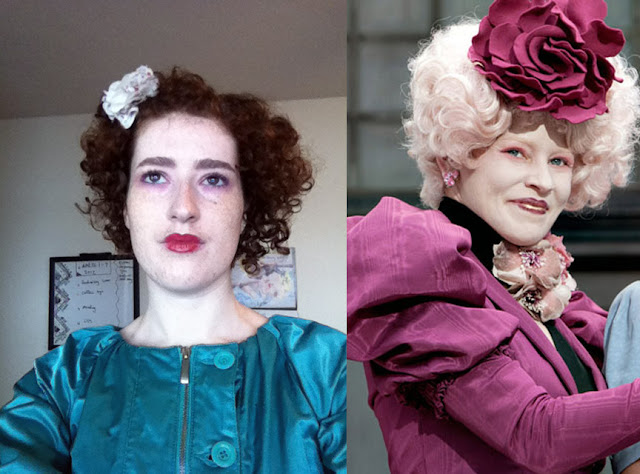 My poor little flower just can't compete with hers. :( 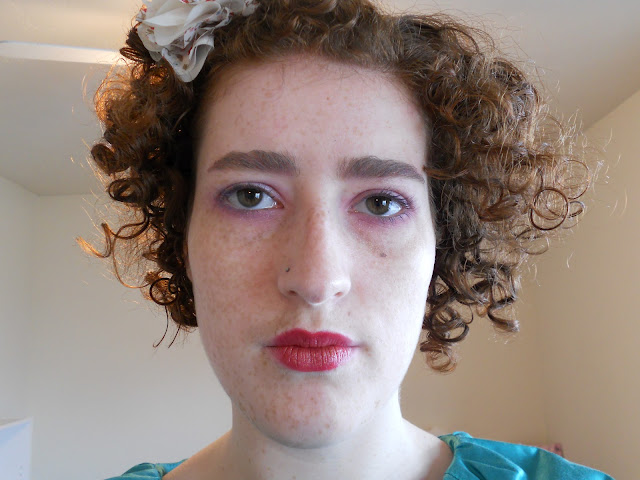 The gold on my lips didn't show up very well in the pictures, and I didn't have an crazy pink eyelashes like she wore in the movie, or these really cool butterfly ones: 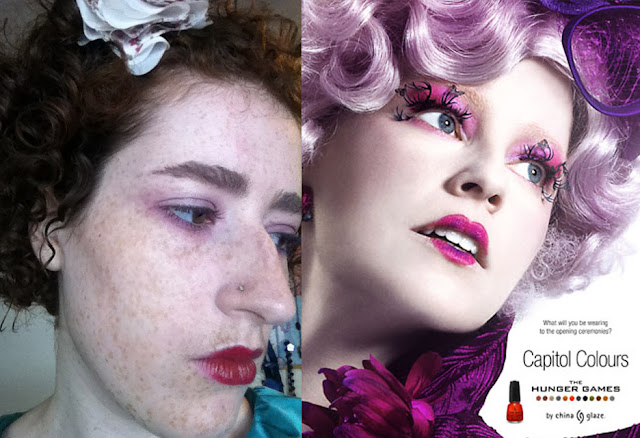 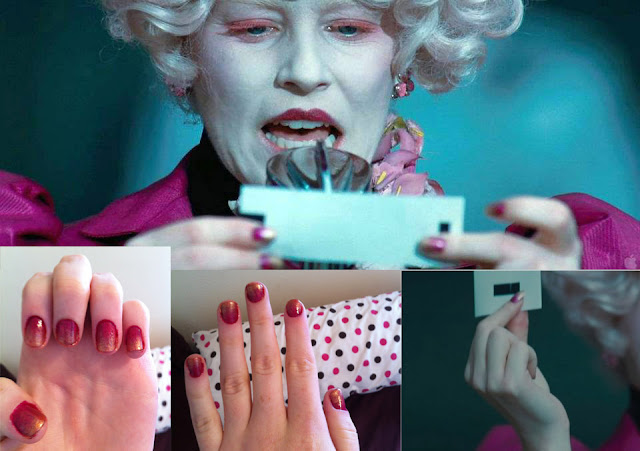 My first ever attempt at gradient nails. They came out pretty good if I do say so myself.

And while I'm on the subject, I may as well give a quick review of The Hunger Games. I wasn't all that interested in it. It's not the kind of book I usually read, but my mom and sister has both read it and were excited for the movie, so during Spring Break, I caved and read all three. Like I said, not really my usual genre, but I liked them. I got through the first one in about a day and half and then spent the next day reading the other two, staying up until 1am just to find out how it ended. The second one, Catching Fire was by far the best; it had the most interesting characters and suspenseful plot. I found the third one a little boring....the characters were just all so traumatized by that point that they weren't doing interesting things anymore.

The movie was....good. Having the book so fresh in my mind, I noticed every little detail that was omitted or changed, but I think they did the best they could. There's just no way to fit everything that happens in a book into a 2-hour movie. They kept most of the important stuff and the spirit of the story. It was well-cast and well-acted. I was pretty skeptical of Josh Hutcherson, since I only remembered him from Zathura and Bridge to Terabithia, not exactly movies on my Top 10 list. Liam Hemsworth too. You can't have high expectations about someone you've only seen act opposite Miley Cyrus. But I thought everyone did well, and speaking of casting choices......my favorite part of the whole movie.....drum roll please......Stanley Tucci with blue hair! I knew before I read the books that he played Caesar, so I pictured him the whole time. I loved that they expanded his role in the movie and even had Katniss hallucinate him at one point. I definitely enjoyed the fashion; I liked how they made District 12 dress kind of like they were in The Great Depression and there was some crazy cool stuff going with the fashion in the Capital. (I wish they would've showed more of the food though!) Also, Seneca Crane, kind of a non-character in the book, was made way more exciting my his awesome curlicue beard!

Posted by Jessamyn Leigh at 9:50 PM

Email ThisBlogThis!Share to TwitterShare to FacebookShare to Pinterest
Labels: Crafts and DIY, Movies and Books, Style and Vintage