Wow, feels like a long time since my last update. Sunday and Monday there was a lot of cleaning to get ready for our room inspections. We missed a few things though, so we had to get a second inspection the next day. Only one room on our whole floor passed the first day. And they fixed the light in our bathroom! I have never been so grateful to have a bathroom light! Now if we could just get the fridge replaced.

I also decorated my journal for small group. I cut up a bunch of magazine and postcard pictures and decoupaged them onto the cover. It came out so good. It was fun to do a craft. I’m also almost done with the one knitting project I’ve done while I’ve been here. I’ll have pictures up soon. And I got to cook this week! But more on that later.


Our lecture this week was really good. It was about worldview and transforming societies. When I was in high school, we did The Truth Project (which is a lot about worldview) at my youth group, and it was my favorite thing I studied. We got to spend most of the week in our small groups and our speaker, Christine Colby, periodically asked us questions and had us read Bible verses and discuss things. I really learn better when I discuss things. On Thursday it was the best lecture ever: we got to go up to the movie theater and watch Amazing Grace with some specific things in mind and then discuss it. I wish that was lecture every day. In the midst of all this worldview and movie talk, (she used a few other examples of movies and how they can effect worldview) I realized that film and changing worldviews are two things that go hand in hand, and two things that I really like…so I’m thinking about pursuing that. There are two film schools: School of Digital Filmmaking and Acting for the Screen that they run here every April that I’m looking into. (Oh, I might get to be an extra in some of their short films depending on the schedule!)

Generally I was pretty worn out this week. Homesickness hit me for the first time. I woke up one morning thinking I had heard Dad calling “Oh, children!” (An Aslan from the Focus on the Family dramatization of Narnia) like he does when we oversleep at home. I got two packages full of treats from home: one from  Mom and one from Aunt Beca. Mom sent me some of my dresses and Beca sent me a lot of local things. There were also some adorable pictures and comics from her kids. Peregrine made me a comic of how much he misses me, and some aliens...and Poppy a picture of some beautiful pink and purple ballerinas. Peregrine also sent me some mail this week containing a dollar bill and a note that said “Happy Hawaii, Jessamyn.” So cute! I’m also missing a lot of big stuff at home in the next few weeks. It’s the first time in 8 years that I haven’t been there for dance recital and the first time in 5 years that I’ll miss a Shakespeare play. My mom has been sending me lots of rehearsal videos and pictures. I’m missing smaller things like midnight movies with friends and shopping days and using the remote too.

I decided that what I thought may have been speaking in tongues was false and felt very relieved after that. We had some good worship and a lot of small group time this week. I’m still feeling pretty impatient in general and working on going with the flow when the schedule changes. I fasted for the first time this week. (I may have cheated a little, because I had a big snack in the morning and a granola bar in the afternoon, but it was my first try.) On Tuesday there was some personal stuff going on with a few of the students and we fasted lunch and prayed for them. We found out today that one of the guys in our school is going home. His family somehow didn’t know that we had an outreach, and he doesn’t have a passport or money to go, so he decided to go home rather than pay the rest of his school fees. It’s sad, especially since he was a new Christian who was learning so much here, but hopefully God has better plans for him. Also a girl tripped on the stairs and sprained her ankle really badly, so pray for a quick recovery!

Schedule-wise, this week wasn’t too full. We started on “Sin City” which is an acting/dancing scene when the Prodigal Son is partying. It’s a pretty fun scene to do. Almost everyone is in it and we all have little stories and characters. I’m a girl getting proposed to, but I turn the guy down, slap him in the face, walk away and start flirting with another guy. Sin City with also involve the “Girl’s Dance.” That’s the only dance yet to be cast and I hope I’m in it because it looks like a jazzy, fun number. We did our first run-through of the whole show. It’s pretty rough; Maria said only 30% finished. I feel pretty good about my pieces. They were all the ones we started really early, so they’re almost ready to go.  I spent some time sorting out and cataloging costumes so they know what to order next year. I’m excited for when we actually get to start doing more production-y stuff like makeup and costumes. I’m so excited to tour!

My homesickness was eased a little by two visits to real homes! My parents have some friends that are on staff here. They were on staff with my parents when they were first married in LA, before I was even born. Anyway, they have two kids and really nice apartment just off campus and I got to go there for dinner. It was spaghetti, garlic bread and salad, which I helped make and stuffed with all kinds of veggies and fruit that I wouldn’t normally put in a salad, but everything looks so good. And I got to make brownies topped with ice cream. It’s so fun to cook again. I was a really nice evening. They were reminiscing about stuff they did with my parents. 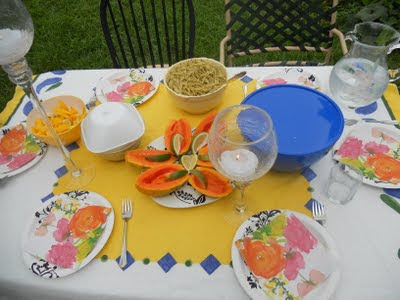 I also got to go to Ashley, my small group leader’s house. She lives on campus with us right now, but she and her mom have a house about 15 minutes up the mountain. It’s about ten degrees colder up there and the view is gorgeous. There are coffee plants growing everywhere.  Their house is cute and quirky. We baked some cookies for a fundraiser and had a lunch of pesto pasta and fruit and just chilled. It was lovely. 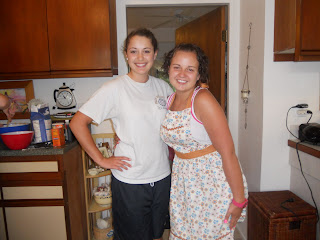 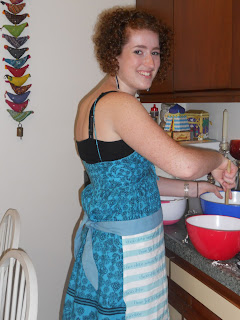 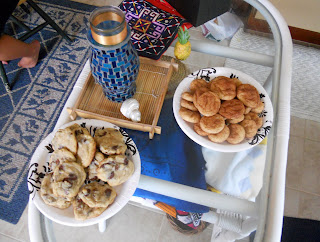 It made for a very long weekend though. Friday night was the Island Breeze Luau fundraiser, complete with a feast of real meat, rice, coconut cake, salad and other stuff, hula lessons, a demonstration on how to open a coconut, and then an hour or two of performing. They do about 6 different styles of Polynesian dances: from Hawaii, New Zealand, Fiji, Tahiti and a few other places. It’s a really good show. My parent’s friend does tech work with them a lot and he can probably swing us some tickets to one of their hotel shows when my family comes in September. 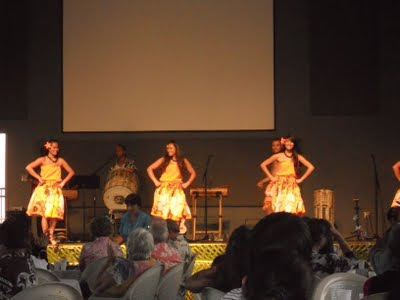 Saturday was kitchen duty in the morning, then we were at Ashley’s all day, and then more dinner kitchen duty and then Open Mic night at the campus café, where we sold the cookies. I was so tired. I only got about 5 hours of sleep that night. Yesterday was the same: kitchen duty most of the day, but I got a bit more of a break and was able to do some laundry, talk to my family, nap, and work on finishing a book that was due at the library. I’ve been rereading a lot of books lately. Things in lecture keep making me think of good books, and fortunately the library is very well stocked with Christian fiction. If you’re looking for good reading I highly recommend the Martyr’s Song series by Ted Dekker, especially Heaven’s Wager. It’s some of his earliest work, and one of the best books I’ve ever read. I’m feeling pretty overwhelmed because I have a long to-do list, dances to practice, a little homework, reading to do, stretching and walking for my back and I need sleep, and I don’t have a day off for a long time. Next weekend we swapped with the other kitchen duty team, so they can cover for us the next weekend, when we got to Hilo, on the other side of the island, to perform at a Korean church.

Last night I watched an episode of Psych with Victoria. We’re determined to spot the pineapple in every episode. Victoria is kind of my doppelganger here. Although our personalities aren’t that similar, we share almost identical upbringings and interests. We were both homeschooled, have great families, (who we Skype with all the time) little brothers, still listen to Adventures in Odyssey, struggle with a lot of the same things, and watch almost the exact same TV shows. Almost every time one of us talks about something, the other goes, “Oh, yeah, me too!” 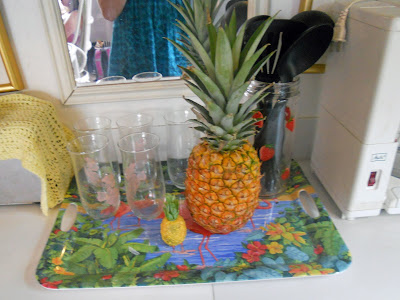 This week looks like it will be a nice break; we’re having Sin City today and tomorrow and then Bible reading the rest of the week instead of lecture, so at least it will be a mental break. I don’t have the complete rehearsal schedule yet, but hopefully it won’t be too bad. And I just found out that next weekend’s work duty will just be the mornings because it’s a holiday weekend, and everyone will pick up lunch and dinner at breakfast time. Hopefully we can get a group to the movie theater to see Pirates 4. Well, that’s all I have to say for now!