Some Projects I Did This Week 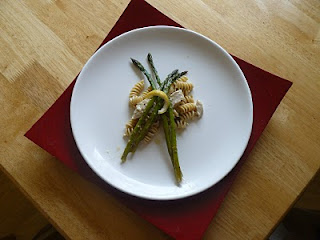 I made chicken alfredo for lunch one day this week. I was craving pasta, so I just threw together whatever we had. The chicken already had some pesto on it, and then I made a basic alfredo with some lemon zest and a little spice added and topped it with oven roasted asparagus. I'm not a big fan of rotini, (for some reason I don't think it tastes as good) but it was all we had around. 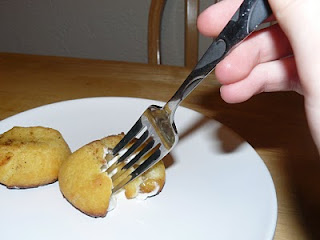 This was a baking experiment that nearly went horribly wrong. I wanted to make chouquettes, a french pastry that's basically a cream puff, and I decided to bake sauteed apples into them. I did a sample one and it worked. I was going to do caramel ginger citrus (we just got a micro plane so I've been trying it out for grated ginger and citrus zest) whipped cream though, and the caramel wouldn't incorporate, so at the last minute I decided to add it to the apples. Not such a good idea. It oozed out all over the pan and burnt. Fortunately none of the burnt part stuck to the bottom of the chouquettes and they still tasted good. You can't really go wrong when there are 3 1/2 sticks of butter in the recipe! 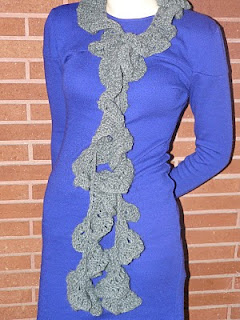 I finally finished knitting my ruffly scarf. I used a pattern I found online that was pretty simple. it's worked side to side (so you can increase and get the ruffles) instead of end to end, so it has a massive amount of stitches. It was hard to tell how it was going to turn out because it was so bunched up on the needles. I used a thinner yarn (Lion Brand Wool Ease) than the pattern suggested so it was extra lacy.
Posted by Jessamyn Leigh at 4:49 PM